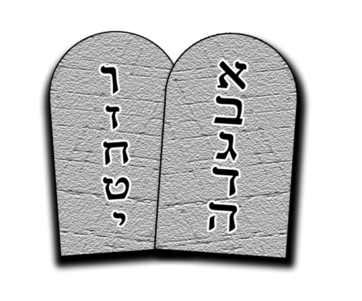 God Did Not Give Moses the “Ten Commandments”

In my Bible study about the Hebrew word “Torah” (click here to read), I pointed out that it includes the following meanings -- teaching, doctrine, instruction and laws. The Torah is also the name of the first section of the Tanakh, the Jewish Scriptures today. The Hebrew words “aseret ha’dvarim” are translated “Ten Commandments.” They only appear in the three verses below in the Hebrew Scriptures:

● So Moses was there with Yahweh forty days and forty nights; he neither ate bread nor drank water. And Yahweh wrote on the tablets the words of the covenant, the aseret ha’dvarim. (Exodus 34:28)

● So Yahweh declared to you his covenant which he commanded you to perform, aseret ha’dvarim; and he wrote them on two tablets of stone. (Deuteronomy 4:13)

● And Yahweh wrote on the tablets according to the first writing, the aseret ha’dvarim, which Yahweh had spoken to you in the mountain from the midst of the fire in the day of the assembly; and Yahweh gave them to me. (Deuteronomy 10:4)

The word “aseret” is translated as “ten.” The root word of “ha’dvarim” is “devarim.” Now I am going to let you translate it. Below are the Hebrew names of the first five books in the Bible with their meanings. You will find the translation of “devarim” there.

The tablets of stone do not appear until chapter 31 and Moses broke those tablets. Yahweh called for him to come back up the mountain and told Moses to write a second set of stone tablets. The Ten Words  are recorded in Exodus 34:10-26 and immediately followed by:

Then Yahweh said to Moses, “Write these words,
for according to these words I have made a covenant
with you and with Israel” . . .
And he wrote on the tablets the words of the covenant,
The Ten Words. (Exodus 34:27-28)

For sellers of translations and some denominations,
traditions are more important than accurate translations.

We will find similar situations like this in other places in translations of the Bible. That’s why so many people believe the Ten Commandments are found in Exodus 20 -- and in Deuteronomy 5.  By the way, there are important differences between the words in those two chapters, too.

I hope you found this BHC Bible Study informative and thank you for reading it.