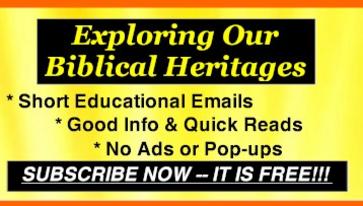 We know how busy most people are today so we decided to use short emails to help people learn about biblical heritages that include Second Temple Judaism, Rabbinic Judaism, the Yeshua Movement, Paul's Movement, Early Christianity, Roman Catholic Church, Eastern Orthodox Church and the hundreds of denominations of Protestantism. Biblical heritages have influenced other religions, as well as played major roles in the creation of universities, science, capitalism and American democracy.

We chose to us emails instead of  just social media platforms for two primary reasons -- privacy and security! There are no predator algorithms stalking readers and collecting information about them on this platform.  These are simple plain texts emails. All of "your friends" and lots of strangers are not seeing what you are reading. We just felt like this "old fashion" way would be quicker, safer, private, more secure and private.

You don't have to pay to subscribe & you may unsubscribe anytime.