The Little Shoes that Changed My Life

My name is Jim Myers. It was close to the end of 1990, a few months after my first grandson was born, I was sitting in my study flipping through a magazine when the picture above appeared.  My eyes immediately locked on the soles of two little shoes.  As I looked at those little shoes, I wondered if that the little child had a grandfather somewhere. Didn't he cared as much for this child as I did for my new grandson. What about the child's mother, who I assumed was the woman with her arm around him or her? And then this question popped into my mind:

What was so powerful that it caused this mother to be part of this picture?

And then it hit me -- It must have been her religious beliefs!  I would never do anything like that to my grandson! But as I thought about her preacher, Jim Jones, I realized that I taught many of their same things he taught, my church's doctrines were a great deal like his, we both preached from the same Bible, and we both promised our members they would go to Heaven when they died and spend eternity with God. As a matter of fact, after listening to his words as he called people to come forward and drink the poison that killed the people in the picture -- he promised them they would all be in Heaven together with God on that same day!

I had very strong feelings about my beliefs, but I realized that my strong feelings were linked to unexamined beliefs. Feelings and accuracy are two very different things. This was a life changing experience for me. I was fortunate enough to have something most people at that time didn't have -- a guideline to help me explore my belief system. I had created it a few years before as a guideline to help members of my Bible study groups when they disagreed.

My Belief System will be LARGE ENOUGH to include all of the FACTS,

OPEN ENOUGH to be EXAMINED & QUESTIONED,

FLEXIBLE ENOUGH to CHANGE when ERRORS or NEW FACTS are DISCOVERED.

After using it for awhile, we discovered this very important fact we hadn't been aware of before: The odds of accurately understanding the words of the Bible for individual studying alone are extremely low. Accuracy requires two or more people working together as a team -- and to increase the odds even more members of the team need to have different beliefs.

Studying alone or with people who all have the same belief systems almost guarantees inaccuracy.

I was very fortunate to have a wife (Susan Myers), one of my professors from UTA (Dr. Ike Tennison) and a rabbi (Jeffrey Leynor) on my team. In addition, friends and members of our Bible study groups over the years in Cleburne, Arlington, Dallas and Mabank have amazing. They allowed us to go where ever the facts took us and trusted the above guideline to lead us when facts destroyed some of our most strongly held beliefs. We had to remind ourselves often -- strongly held errors aren't worth defending.

The child in the above picture would be over forty years old now. I hope and think he or she would be very pleased to know that our lives have been changed and made safer and better because of the picture.  I just wish that its grandfather had know what I know now and prevented it from going to Jonestown.

We created the Biblical Heritage Center to share what we have discovered with you! 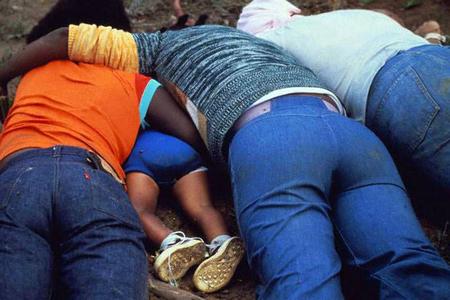 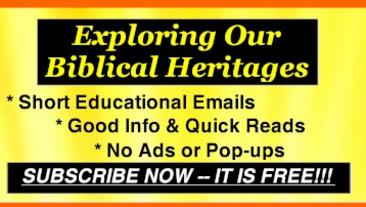