1. The book that we call “the Bible” is a translation.

My Bible was an English translation.

2. Which Bibles are translations made from the original of the books of the Bible?

None!No original texts of any of the books of the Bible are known to exist.

3. What do Bibles translators translate?

As of 2005 more than 5,700 Greek manuscripts and fragments of New Testament writings had been discovered and cataloged. They include everything from the smallest fragments of manuscripts — the size of a credit card — to very large and magnificent productions, preserved in their entirety. No two of those manuscripts are identical – there are differences between them.

In addition about 10,000 manuscripts of the Latin Vulgate have been discovered, along with manuscripts of other versions -- Syriac, Coptic, Armenian, Old Georgian, Church Slavonic, and others. In addition, writings of church fathers also have been discovered -- Clement of Alexandria, Origen, and Athanasius are among the Greek; Tertullian, Jerome, and Augustine among the Latins. All of them have quotes the verses of the New Testament, thus making it possible to reconstruct what their manuscripts (now lost, for the most part) must have looked like. Again, like with Greek manuscripts, there are differences between these manuscripts, too.

Scholars have been trained to “reconstruct the ‘original’ text.” They follow established principles for making their determinations when it comes to dealing with differences in manuscripts. This is not an easy task. It is important to understand that all of the manuscripts were copied by hand -- and then copies of copies, copies of those copies, etc. were made. Churches wanted to share manuscripts with other churches and had copies made. As manuscripts wore out, new copies had to be hand copied.

A number of scholars have even given up thinking that it makes sense to even talk about the “original” text. But with 21st technological advances in computer hardware and the creation of powerful new algorithms, scholars are able to discover writings on ancient manuscripts that could be seen before, as well as incorporate genetic discoveries about writing materials in their work. In addition archaeological databases are linking information from digs to information in ancient manuscripts.

Databases created by differences between manuscripts made by scribes are also growing and information linked to the scribes copying the manuscript are revealing more  treasures -- their beliefs, worldviews, authoritarian situations, and so on. All of these things combine to give snapshots of realities of people involved in the transmission process over the past 1,500 years.

4. Examine your beliefs about the Bible and incorporate the facts above.

I was raised in a church that taught “the Bible is the inerrant and infallible Word of God.” We treated the words of the Bible “as if they were directly spoken and recorded by God Himself”! As you will learn more about later, what I was taught is now called “an institutional truth” – a truth based on the authority of an institution (our church).


The statements above about the thousands of manuscripts that have been discovered and cataloged are “fact-based truths.” The “fact-based truths” we discovered did not support my church’s “institutional truth.” This is one of those situations when we turn to the guideline we pledged to follow:

My belief system will be flexible enough to change
if errors or new facts are discovered!

I replaced my church’s authority-based institutional truth with the fact-based truth! How could I be honest and do anything else!

Keep good notes when studying the words of the Bible. Document differences you discover, as well as new archaeological and cultural information. 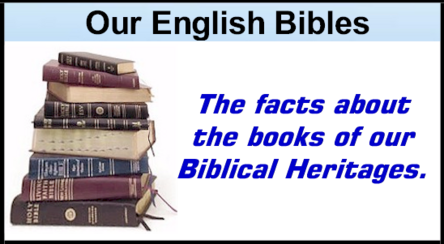