Stay up to day by "Liking" our Facebook pages & "following" our blogs. 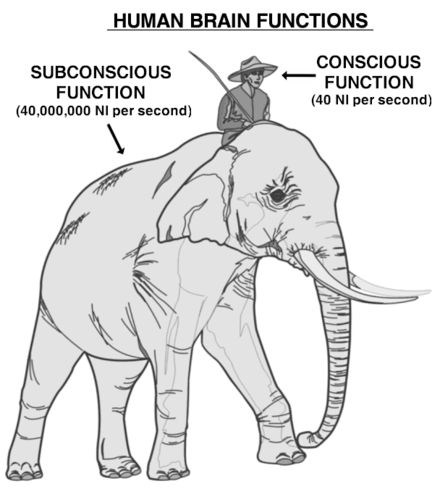 The human brain functions on two levels – conscious and subconscious. The conscious function endows us with self-consciousness -- a quality of being both a participant in life and an observer of life at the same time.[i] Self-consciousness enables an individual to factor in the consequences of his or her actions, not only in the present moment but also in the future. It also makes self-reflection possible.[ii] The tiny conscious function processes about 40 nerve impulses per second.[iii]

The subconscious functionevaluates everything in terms of potential threat or benefit to the self; and then adjust behavior to get more of the good stuff and less of the bad. Animal brains make such appraisals thousands of times a day with no need for conscious reasoning, all in order to optimize the brains answer to the fundamental question of animal life: Approach or avoid?[vi]

The subconscious function devotes lots of time and energy to predicting what will happen next, so that the body will be ready for any contingency. Every moment of your life, your elephant (subconscious function) is issuing thousands of predictions at a time -- based on your past experiences. The predictions that win are usually the ones that fit the situation in the next moment -- immediate and short term options.[vii]

It forecasts when your heart should speed up or slow down, when your blood pressure should rise and fall, when your breathing should deepen, and when you need more salt, sugar, water or hormones, and attempts to meet those needs before they arise. It’s like running a budget for your body, but instead of money, the currency is biological.[viii]

Your rider (consciousness function) gets involved when the unexpected happens and the elephant needs time to work out what to do next. It also plays a vital role in settling internal conflicts within the brain.[ix] Say you find yourself reaching for an ice cream sundae, but you know that you’ll regret having eaten it. In a situation like that, a decision has to be made. The rider has a unique vantage point and plays the role of arbiter between the billions of interacting elements, subsystems and burned-in processes. This makes it possible for rider to make plans and set long-term goals for the system as a whole. [x]

Guardian of Its Most Trusted Memes

1. It searches for patterns in incoming information that confirm its most trusted memes.

2. It identifies patterns that confirm its most trusted memes.

3. It distorts and reshapes patterns that do not match its most trusted memes to make them fit its preconceived concepts and models.

4. It filters or completely screens out patterns that do not fit or conflict with it most trusted memes.

Keep in mind that it does all of the above at the subconscious level which means that we are not consciously aware of what is happening. It is very important to understand that the choices made by the elephant aren’t always the best ones or the ones the rider would make for ethical, moral or logical reasons.[xi]

Herein lies what science has to offer when it comes to human morality – science can tell us about facts and how our brains work but science is not a source that can provide the millions of memes require to successfully function in life. The primary sources of memes are social institutions -- beginning with families, religions, schools and governments. Very few riders are ware of the memes their elephants are consuming. From the elephant's point of view, it feeds on whatever memes happens to catch the attention of the sensory organs -- memes of time-tested values and wisdom or memes from dangerous extremists institutions.  If it continues to consume any type of memes, it will began to trust them and at some point they will be the trusted memes it will guard and protect. This can happen to you, your children, your grandchildren, your neighbor – or a stranger that you just happens to encounter at the wrong time and place.

Armed with the Transparency Guideline and a Transparency Vocabulary, you will be able to pull back the curtain of consciousness and become aware of what your elephant has been feeding on and what it is doing. You will also be able to find new sources of memes for your elephant to consume and guide it to better sources. Once you do that the biology of the brain will begin to take over. However, you cannot do this alone because of the processing power of your subconscious function. Even though we may completely be unaware of what our subconscious function is doing, someone with different trusted memes can often see exactly what someone else's elephant is doing. You need help -- it takes a team.